Nigerians In London Protest Against Insecurity, Raids In South-East 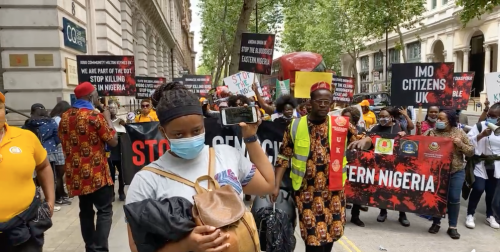 Some Nigerians have taken to the streets of London, the United Kingdom to protest against the insecurity in the Southeast.

The protesters had moved from Trafalgar Square to the Nigerian House in London to register their displeasure over the insecurity in the South-East region.

On Friday, a Facebook live video from BBC pidgin showed the Nigerians who were dressed in Igbo attire flooding the streets of London, chanting ‘Enough is enough, ‘stop killing the Igbos, stop killing the Christians’, ‘Igbos have mothers too’.

One of the protesters said, ”These are the Igbos, the ones that their youths are being killed.

“The Nigerian Army, police are in South-East killing our youths. Our parents have been maimed, our mothers have been raped, kidnapped, the Nigerian government has killed us, we are being marginalised.

“The Hausas, Fulanis, Buharists are murdering us. The police, the army have no right to be in Igbo land, they should go to the North, children are being kidnapped, the army should go there and rescue them.

“Enough is enough, they have no reason to come after us, they have refused to give us part of the national cake but we are people who strive and work hard and make a living for ourselves. They should let us be!”

President Muhammadu Buhari was scheduled to travel to London on Friday for a medical checkup but a statement on Friday from the Presidency said the trip had been postponed.