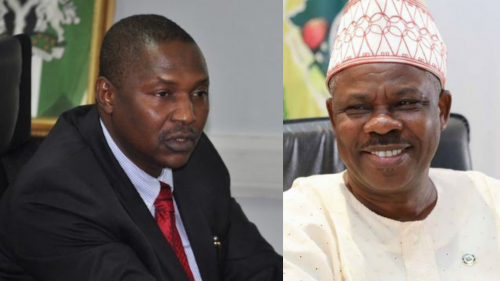 Former Governor of Ogun State and current senator Ibikunle Amosun could be paired with Attorney General of the Federation Abubakar Malami as Vice-President to succeed Muhammadu Buhari in 2023, according to APC and White House powerbrokers.

Apart from the fact that both Amosun and Malami are close allies of President Buhari, SaharaReporters has learned that the party hopes to exploit their youth in front of Nigerians.

The cabal claimed that the party’s membership revalidation exercise, which will end on March 31, and the ongoing investigation by the Economic and Financial Crimes Commission had undermined the position of former Lagos State Governor and APC National Leader Bola Tinubu, according to top APC sources.

“Under our party, Ibikunle Amosun has been penciled in as Malami’s running mate. The APC validation exercise is nearly complete, and it essentially removes Tinubu from the party. His plan in the APC has backfired, and the EFCC is on the lookout for him.

“The governors are currently debating whether or not to zone to the south. You may recall Kogi State Governor Bello saying over the weekend that the APC constitution had no provision for zoning. “They (the governors) would gradually make zoning talk unpopular,” a source said.

On March 1, Sahara Reporters announced that Malami had begun preparations to run for president in 2023, a campaign he expects to heavily finance through the Economic and Financial Crimes Commission, which he will chair.

Malami, who has now added the EFCC to his herd of milking cows, has shelved his earlier ambition of running for governor of Kebbi State in favor of the presidency.

“The AGF has decided to run for president. He has given up his bid for governor of Kebbi State. He claims he is too wealthy to run for governor after amassing so much wealth under the Buhari administration.

“After putting Bawa, his boy, in charge of the EFCC, he has been minister for eight years. He was desperate to take over the anti-corruption agency so he could make more money and pick candidates for the 2023 elections, according to a source close to Malami.

Malami played a key role in the removal of Ibrahim Magu, the former acting EFCC chairman, from office, after years of feuding with him.

Despite detailed investigations indicting the 40-year-old of fraudulent acts, the AGF fought to ensure that President Muhammadu Buhari appointed Bawa as part of his grand plan to achieve his 2023 ambition.

A 13-page investigation report by the EFCC, which indicted Bawa, who was then the Port Harcourt Zonal head, was forwarded to President Buhari in 2019, according to SaharaReporters, but the President failed to read or act on it.

The report had been forwarded to the President’s office, but the AGF influenced how it was dumped and President Buhari did not act on it.

On March 4, SaharaReporters reported that Aso Rock cabals had succeeded in imprisoning Vice President Yemi Osinbajo through the investigation of a former Chairman of the Federal Inland Revenue Service, Tunde Fowler – both of whom are Tinubu’s godsons.

The imprisonment of Vice President Yemi Osinbajo, the investigation of the former FIRS chairman, and the EFCC investigation of Tinubu were all designed to force the APC leader to abandon his presidential ambitions in 2023 in favor of President Muhammadu Buhari’s “candidates anointed.”

According to top presidential sources, the cabal will intensify its investigation into Tinubu and his godsons in order to force the APC chieftain to drop out of the presidential race before the end of 2021.

According to SaharaReporters, AGF Malami, who is also desperate for the presidency in 2023, is one of the masterminds of the various probes surrounding Tinubu and his allies.