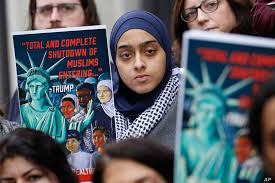 Nigerians and other nationals who were denied United States visas because of former President Donald Trump’s travel ban on 13 mostly Muslim-majority and African countries can seek new decisions or submit new applications, the State Department has said.

US State Department spokesman Ned Price said applicants who were refused visas prior to January 20, 2020, must submit new applications and pay a new application fee.x

Price stated that those who were denied on or after Jan. 20, 2020, may seek reconsideration without re-submitting their applications and do not have to pay additional fees.

Since his swearing-in, United States President Joe Biden has reversed a number of policies by his predecessor Donald Trump, including an immigration ban against Nigeria, Yemen, Venezuela and other countries in January.

With the travel restriction, Nigerians were denied the opportunity of applying for US green cards which gives them an official immigration status in the United States.

Biden overturned Trump’s so-called Muslim ban on January 20, his first day in office, calling it “a stain on our national conscience” in his proclamation.”

The reversal of the immigration policies is part of Biden’s campaign promises to chart a new course for the nation.x

Biden, however, has signed an executive action ending restrictions on travel and immigration from some predominantly Muslim countries.

But Price disclosed that applicants selected in the diversity visa lottery prior to the current fiscal year are barred by U.S. law from being issued visas if they have not gotten them already.

The diversity lottery aims to accept immigrants from countries that are not normally awarded many visas.

Biden’s executive order in January ordered the State Department to resume visa processing for those countries and develop a plan to address people affected, such as those who were denied entry to the US.

“There’s no time to waste…These are just all starting points,” Biden said before signing the 17 executive orders in the White House.