Budweiser sends beer to EVERY keeper who has conceded a Lionel Messi goal. Guess who gets 17,19 beer bottles for 17,19 goals.(photo) 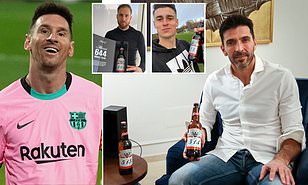 Budweiser have celebrated Lionel Messi‘s record-breaking 644th goal by sending each of the goalkeepers he scored against a personalised bottle of beer.

The Barcelona captain’s goal against Valladolid on Tuesday night saw him break Pele‘s long-standing record for most goals for a single club.

As a result, the beer company has sent every shot stopper Messi has overcome one beer for every goal he scored against them, with each bottle numbered with the corresponding goal on the front of the label.

Gianluigi Buffon was pictured with bottles No 514 and 515 when Messi scored twice against him in the Champions League back in 2017.

The Italian goalkeeper took to Instagram to congratulate Messi for the award while he was enjoying his free drinks.

Buffon said: ‘@budfootball… thanks for the beers. I’ll take it as a compliment. We have great battles over the years! Congratulations on breaking the 644 record @leomessi… it really is an unbelievable achievement. Cheers!’

Leo Messi delivers on the pitch, we deliver off the pitch. A personalised bottle for each goalkeeper’.

Atletico Madrid goalkeeper Jan Oblak will be expecting a crate from Budweiser as Messi has scored 11 goals past the Slovenian during his career.

But he is a great player, an amazing player, the best player. There are many times that he scores a goal and you have this feeling that you cannot understand how he has scored so easily.’

Chelsea goalkeeper Kepa Arrizabalaga was also snapped with two Budweiser bottles after conceding goals to Messi in both league matches against Barcelona for Athletic Bilbao in the 2017-18 season.

Former Valencia goalkeeper Diego Alves is believed to be the goalkeeper with the most Messi goals conceded against him with 19.

Real Madrid legend Iker Casillas is another goalkeeper who can be expecting several Budweiser bottles with 17 Messi goals against his name.

The recipient of beer No 644 is Valladolid goalkeeper Jordi Masip, a former team-mate of Messi at Barcelona.