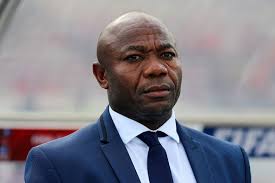 The FIFA U-17 World Cup winner in Chile 2015 was emphatic when he spoke with Complete Sports from his base in Spain, querying the rationale behind the offer for him to work under anyone despite his high coaching pedigree.

A Winner of the African Cup of Nations in 1994 and Olympic Games Soccer gold in 1996, Amuneke had previously rejected NFF’s Technical Director job which is now held by his former Super Eagles teammate, Austin Eguavoen.

The 1996 Africa Footballer of the Year is currently the Sporting Director of Egyptian Premier League side, Msr El Makkasa.

“But why should I be an assistant coach to anyone with my pedigree? With what I’ve done in the game, both as a player and as a coach, I think it is normal for me to be going higher than descending to working under another coach,” Amuneke queried rather rhetorically.

With hisses greeting Rohr’s epileptic performance with the Super Eagles in the three time African Champions’ disappointing 4-4 draw against Sierra Leone in Benin in an Africa Cup of Nations Group L qualifier and another scoreless draw with same team four days later in Freetown, Nigeria Football Federation has thus mounted the starting block in the race to bolster the Super Eagles squad ahead the next round of qualifiers next year March against Squirrels of Benin and Crocodiles of Lesotho.

“I don’t have any ambition or desire to work under any other coach either in Nigeria or elsewhere with my pedigree in the game,” the left footed winger who also played for Egyptian giants, Zamalek, during his illustrious career added.

“I did not apply to NFF to work as an assistant to Rohr and nobody, as at this moment, has approached me about the prospect of assisting Rohr in the Super Eagles.

Recall that Amuneke’s stoic disposition to working under Rohr could be a direct response to Rohr’s earlier refusal to work with him when the coach insisted on having Salisu Yusuf back in the team.

Yusuf is now the technical adviser of Enugu Rangers, a Nigeria Professional Football League, NPFL side.