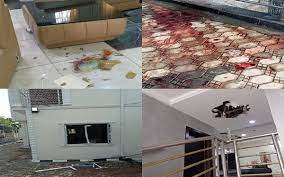 The wife of Yoruba rights activist, Sunday Adeyemo, aka Sunday Igboho, and others abducted by some gunmen in military uniform who attacked his house in the early hours of Thursday have been released.

According to the media aide to the activist, Dapo Salami, the abducted victims were released by the gunmen in Ekiti state.

“Yes, they have been released. It’s true. They were found in Ekiti,” Salami told SaharaReporters.

One of the victims however claimed they were given N20,000 to board vehicles to Ibadan.

“The DSS (Department of State Services) felt reluctant to release a lady blogger and other six boys while in Ekiti State. The corpses of five people who were allegedly killed by men of the DSS and soldiers have been deposited at a particular mortuary in Ekiti State,” the Sun quoted the released victim as saying.

“After we had alighted, they gave us N20,000 for fare to Ibadan. They did not beat us and they did not maltreat us throughout the journey in the DSS operational vehicles.”

SaharaReporters had reported how Ighoho’s house in the Soka area of Ibadan, Oyo state was attacked around 1am on Thursday.

At least 10 vehicles belonging to the self-styled activist, including his G-wagon, Prado SUVs, and valuable properties, furniture, and windows were destroyed.

Bullet holes were also found on the buildings in the compound while blood was seen on the floor by our correspondent.