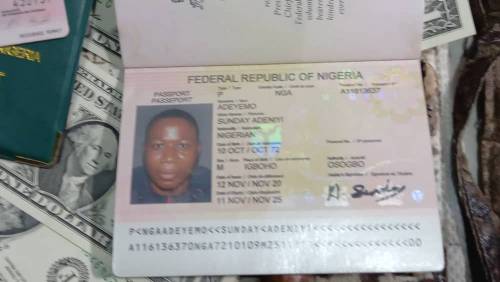 The Department of State Services (DSS) has paraded some supporters of Yoruba Nation agitator, Sunday Adeyemo, popularly known as Sunday Igboho, who were arrested during a raid on his residence at Soka in Ibadan Oyo State.

The spokesperson for the service, Peter Afunnaya, who addressed journalists on Thursday night in Abuja said the service got intelligence that Ighoho had stockpiled arms in his house.

He said DSS operatives came under heavy attack by nine men suspected to be his guards with six of them armed with AK- 47 and pump-action rifles.

Afunnaya said during the exchange of gunfire, two of Igboho’s men were gunned down while the rest were subdued and arrested.

He added that one of the operatives sustained gunshot injuries during the encounter.

Afunaya said,  “Highlights of this brief are to inform Nigerians and the world that Sunday Igboho and his group, in the guise of a campaign for self-determination, have become well-armed and determined to undermine public order.

“The arrest and seizures are no doubt confirmation of a grand plan by Igboho and cohorts to wage a violent insurrection against the Nigerian state.

“Alert foreign missions and licensing authorities within and outside Nigeria about this development and the possibility that Igboho could declare some of his personal permit and identity cards missing in order to seek their replacement.

“Consequently Adeyemo/Igboho is advised to turn himself in to the nearest security agency.”