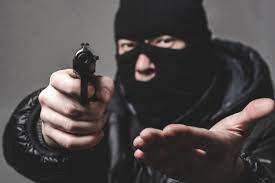 At least 20 armed robbers stormed Alaafia Estate in Orogun, Ibadan, the Oyo state capital around 11pm on Sunday and operated till around 2am on Monday, dispossessing residents of valuables running into millions of naira.

The robbers were said to have gained entry into the estate through a recently dredged carnal linking Barika, Agbowo, and Orogun.

Armed with machetes, guns and other dangerous weapons, the daredevil robbers divided themselves into groups in the estate and robbed houses with numbers 33, 31, 25 and some others concurrently.

SaharaReporters gathered that no fewer than 20 families were direct victims of the robbers with one Peter in House 33 sustaining machete cuts on his left hand while his wife was said to have been beaten with a machete.

Eyewitnesses said they forcefully gained entrance into their victims’ apartments, moving boastfully and daring the residents to come out if they were up to the task.

At House 31, where at least twelve flats were robbed, the robbers forced their victims to use the POS which they brought but when the network failed, they demanded the ATM cards of their victims along with their PINs, which they went away with.

As they moved to House 25, where the robbers were said to have accused some residents of peeping through the window during their previous operation in the estate, doors and properties were badly destroyed as they threatened to unleash hell on them.

A resident said: “As they battled to break into the house, one of them was telling the new ones they recruited to join them this time around and that somebody was peeping through the window from the house. They said we would see hell if they broke into the house if we didn’t willingly open the door.”

However, the Ojoo Police Division was said to have mobilised to the estate blowing, shooting as they made their way there.

Hearing the gunshots, another resident told our correspondent he could hear one of the robbers shouting, “Big daddy (police) are here; won ti mbo, e ja ke lo (they are coming, let us go).”

The police were said to have recovered four machetes and a locally made pistol around the scene of the robbery.

Narrating their ordeal, one of the victims who spoke on condition of anonymity, said “When they came, they jumped into our house and shot into the air. They started saying ‘awon daa, wey money’ (Where are they? Where is your money?) They entered around 12:45 am and left around 1:45 am for other buildings.”