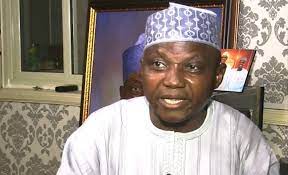 The Senior Special Assistant to the President on Media and Publicity, Mallam Garba Shehu, has explained the reason why President Muhammadu Buhari did not attend the burial of the late Chief of Army Staff (COAS), Lieutenant General Ibrahim Attahiru, who died a in plane crash along with 10 other officers in Kaduna on Friday.

Recall that COAS Attahiru and the rest victims were buried in Abuja on Saturday with President Buhari and Vice President Yemi Osinbajo conspicuously absent at the event.

Buhari’s absence at the funeral drew condemnation from Nigerians, who questioned his absence from critical national occasions and his perceived lack of empathy.

But the presidential media aide while featuring on an AriseNews TV programme, said the President was absent at the burial, which took place at the National Military Cemetery located along Abuja’s Airport Road, in order not to cause discomfort for road users.

Shehu buttressed his defence with a situation where President Buhari observes his weekly Juma’at prayer at the Aso Rock Villa mosque instead of the National Mosque located at the Central Area of the capital city, in order to avoid closing of roads for presidential convoy passage and causing discomfort for Nigerians by denying them the right of way.

According to him, “I have not spoken to the President on this (absence from COAS burial) but the president is someone who is concerned about the safety and well-being of ordinary Nigerians on the street.

“Do you know why he pray his Jumaat prayer in the State House? He doesn’t like going to the National Mosque because he doesn’t like this idea of closing the roads, security men molesting innocent people on the road for the President to have the right of way. These are small things for many people but they are important for President Muhammadu Buhari.

“It is a mourning situation and the President didn’t want to take attention away from that,” Shehu stated.