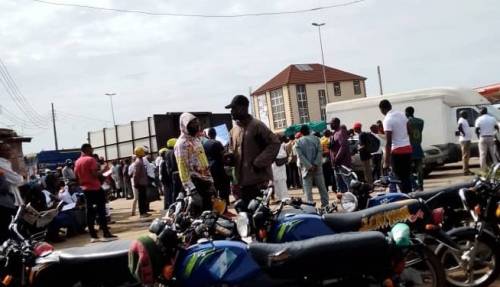 Agitators for the independence of the Yoruba nation stormed Akure, the Ondo State Capital, on Saturday.

The protesters gathered at Isinkan Roundabout, Akure, calling for self-determination

One of the agitators, who identified himself as Tosin, said, “We know why we call for Oduduwa Nation. We know how hard it is to survive right now. Should we be slaves to the Hausas? No. God has given the Yorubas all the resources needed for survival.

“We are a nation; we are not forcing this. Someone from Osun State can understand someone from Kwara State, another from Ekiti will also understand. We are to rise and support one another so we can be free from bondage. By the time we gain independence, we will have enough; our farms will be safe, no Fulani herder will bring their cows on our farmlands to destroy it.”

Another agitator, Deborah, lamented the rate of unemployment and insecurity in the country. She said, “Enough is enough. We are tired. There are no jobs for the youth, the security architecture is terrible. No food, no security; everything is now expensive. We are free-borns, not slaves. We shouldn’t be living as slaves. The independence of the Oduduwa Nation will be actualized because we are all in support of this move.”

A week ago, SaharaReporters reported that several Yoruba youths, under the aegis of Omo Oduduwa United, stormed the streets of Osogbo, Osun State, to agitate for the Yoruba nation despite threats by security operatives.