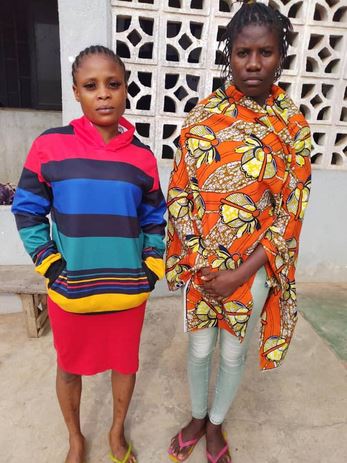 NDLEA spokesperson, Femi Babafemi, in a statement on Wednesday, revealed that the suspects were arrested following intelligence-based raids and follow-up operations on their locations.

He added that over 192kilogrammes of cocaine and other psychoactive substances were recovered from the suspects while the octogenarian, her granddaughter, and two other ladies; Tessy Matthew and Blessing Adesida were arrested.

The statement read, “The grandma and her granddaughter were arrested at 6:30am on Sunday at Ayeyemi Street, Akure south local government area. During the early morning raid, the following were recovered from them: Skuchies- 149kg, cocaine-11grammes, methamphetamine-17grammes, heroin-3grammes, cannabis sativa- 4.914kg, swinol -8grammes and tramadol -49grammes. Also recovered from them were two deep freezers and a TVS motorcycle.

“On the same date, at about 1:30pm, a raid carried out at Rate Hotel, Care Street, in Akure South LGA led to the arrest of 25-year-old Tessy Mathew from whom 33kilogrammes of skuchies were recovered. Following her preliminary interrogation, a follow-up operation was immediately carried out, leading to the arrest of 25-year-old Blessing Adesida in Oshinle area of Akure South LGA.

“Recovered from her include: skuchies-3kg and cannabis-7grammes. According to the states acting Commander of the Agency, Callys Alumona, other members of the two drug cartels have been on  a watch-list and efforts to arrest them are ongoing.

“As a result of the bust, Chairman/Chief Executive of NDLEA, Brigadier General Mohamed Buba Marwa (Retd) has directed the acting Commander, Ondo state command of the Agency, Callys Alumona to launch a manhunt for other members of the drug cartel now on the run.”