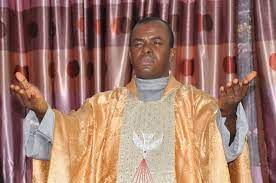 Hours after Fr. Mbaka was reported missing, Mygossipshopcrew gathered that he shows up at the  Adoration ground.

The previously protesting faithfuls of the charismatic Adoration minister, Rev Fr. Ejike Mbaka went into Jubilation at about 2:50 pm on Wednesday when the Priest re-emerged.

Mbaka was seen along Igboeze street in Independence layout close to Catholic Bishop’s court in an SUV vehicle where he wound down the glass to receive cheers from his faithfuls who had laid siege at the Bishop’s court demanding for Mbaka’s whereabouts.

Fr. Mbaka asked people to move to his adoration ground where he promised to address a press conference.

Where he emerged from is not yet known.